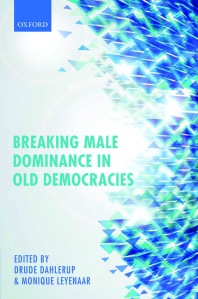 Read more about the book:

Has male dominance in political life been broken? Will gender balance in elected assemblies soon be reached? Around 100 years after women’s suffrage was gained, and in spite of much effort, most countries are still at some distance from this goal. In 2012, the average representation of women in the world’s parliaments was around 20 per cent. This book analyses the longitudinal development of women’s political representation in eight old democracies, where women were enfranchised before and around World War I:

These countries/states have all followed an incremental track model of change in women’s position in political life, but have followed different trajectories. This slow development stands in contrast to recent examples of fast track development in many countries from the Global South, not least as a result of the adoption of gender quotas. Furthermore, the book discusses in four separate chapters the common historical development in old democracies, the different trajectories and sequences, the framing of women politicians, and the impact of party and party system change.

In this book an innovative model of male dominance is developed and defined in terms of both degree and scope. Four stages are identified: male monopoly, small minority, large minority, and gender balance. The book then reconceptualizes male dominance by looking at horizontal and vertical sex segregation in politics, at male-coded norms in the political workplace and at discourses of women as politicians.

Chap.11. Trajectories and Processes of Change in Women’s Representation (Dahlerup)